Tim Lobstein of the World Obesity Federation and Professor Boyd Swinburn of the University of Auckland, both partners in the STOP project, were part a team of international consortium of experts who made up Lancet Commission on Obesity, which recently launched a landmark report: The Global Syndemic of Obesity, Undernutrition and Climate Change: The Lancet Commission report. Both authors were cited widely in the media, here in a Guardian article. 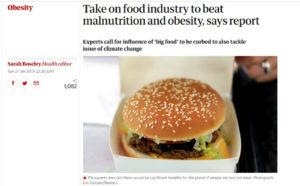 The report from The Lancet discusses powerful vested interests and misplaced economic incentives as the major drivers of the joint pandemics of obesity, undernutrition and climate change. Specifically, the report says that the global interplay of obesity, undernutrition and climate change represents ‘The Global Syndemic’: the synergy of 3 global pandemics. The report describes the syndemic as the greatest threat to human and planetary health, affecting most people in every country and region. It also states that powerful opposition by commercial vested interests, a lack of political leadership, and insufficient societal demand for change are preventing action on The Global Syndemic, with rising rates of obesity and greenhouse gas emissions, and improvements in rates of undernutrition.

What is needed is a new social movement for change and a radical rethinking of the relationship between policymakers, business, governance and civil society. The Commission is calling for: a global treaty to limit the political influence of Big Food (a proposed Framework Convention on Food Systems – modelled on global conventions on tobacco and climate change); redirection of US$5 trillion in government subsidies away from harmful products and towards sustainable alternatives; and advocacy from civil society to break decades of policy inertia.

In other words, leaders must take a hard line against powerful commercial interests and rethink global economic incentives within the food system in order to tackle the joint pandemics of obesity, undernutrition and climate change, including the establishment of a new global treaty on food systems to limit the political influence of Big Food.

Malnutrition in all its forms, including undernutrition and obesity, is by far the biggest cause of ill-health and premature death globally, and is expected to be made significantly worse by climate change. Projects like STOP and reports like the one featured in The Lancet, are trying to draw attention to these pressing, yet solvable, problems.