Today, childhood obesity numbers are nearly doubling every 10 years and it is estimated that 158 million children aged 5-19 years are living with obesity globally; a number projected to reach 254 million in 2030.

People with obesity are constantly shamed and blamed for their disease. This is because many people – including doctors, policymakers, and others – do not understand that obesity is a chronic disease. They see it as a simple lack of willpower, laziness, or a refusal to “eat less and move more”. But like all chronic diseases, the root causes of obesity run much deeper. They can be genetic, psychological, sociocultural, economic, and environmental. It is time we break the cycle of shame and blame and revaluate our approach for addressing this complex chronic disease that is increasing in prevalence worldwide.  To fulfil this mandate, The Science and Technology in Childhood Obesity Policy project (STOP) is generating novel and relevant scientific evidence on the determinants of childhood obesity in European countries.

During the World Café series with CO-CREATE, PEN, and JA Best-ReMaP, Prof Franco Sassi moderated a discussion to explore preliminary findings from STOP research on prenatal and early life influences on childhood obesity, the epigenetic, metabolic determinants of obesity, including the role of the built environment on childhood obesity-related outcomes. 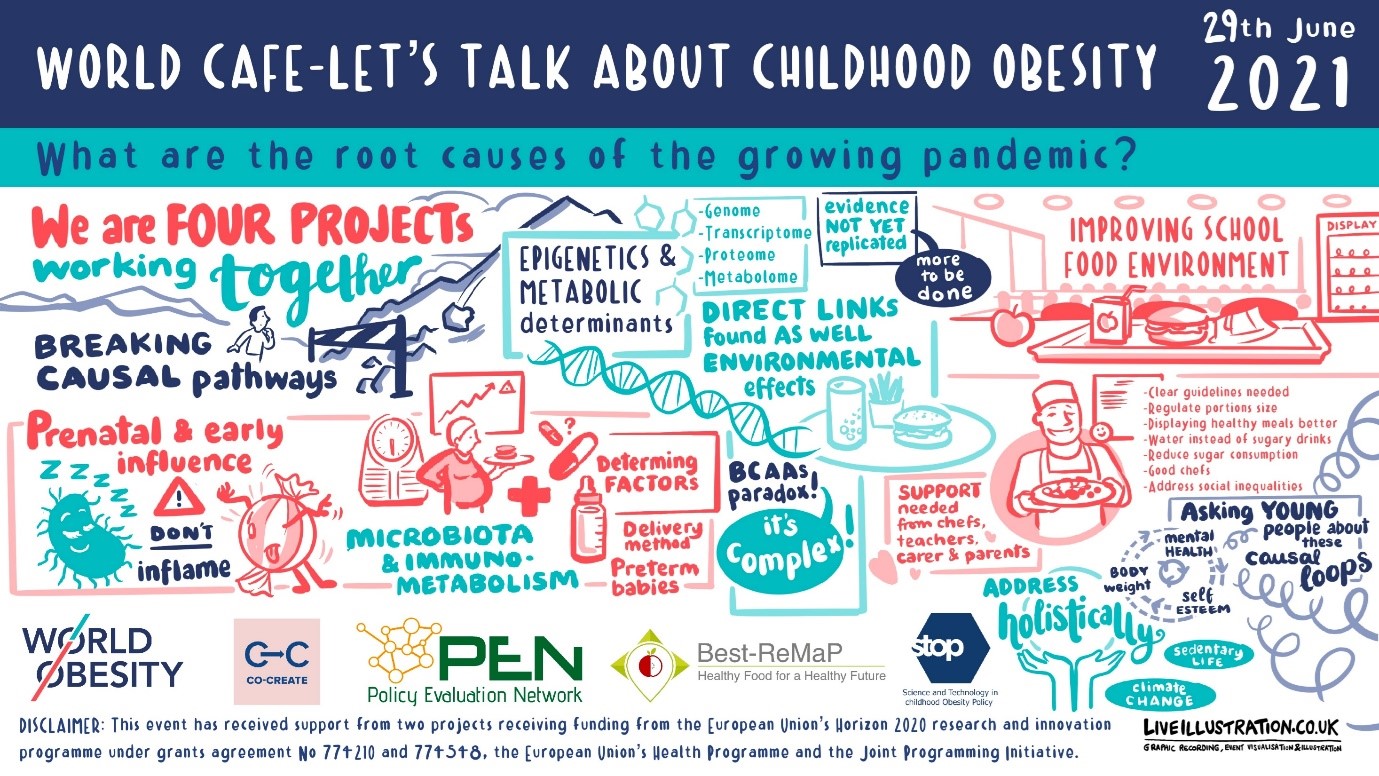 ‘The STOP project has the ambition to work as a bridge between the science of childhood obesity and the policies that governments need to implement to address this problem. What the four projects have in common is that we are trying to focus on upstream approaches. We want to change the environments in which children live, particularly the food and physical activity environments through regulation and policies for children most in need. This includes children with lower socio-economic circumstances.’ – Professor Franco Sassi, Professor of International Health Policy and Economics, Imperial College London, and Coordinator of the STOP Project’

Genes have an important role in an individual’s propensity of developing obesity, equally the environment and the interactions of genes with the environment. Preliminary findings from STOP reiterate the importance of protecting the microbiota and supporting mothers in leading healthy lifestyles throughout their pregnancy. For instance, consuming diets low in saturated fats to prevent induce dysbiosis and inflammation. Birth and feeding methods, including infant antibiotic exposure, can also disrupt the gut microbiota, increasing the risk of childhood obesity and increased adiposity. Later in life, other factors must also be taken into consideration. Interventions must be adapted to limit children’s consumption of Ultra-Processed Foods (UPFs), a cause for concern due to the pervasiveness of marketing through traditional and non-traditional platforms. The infrastructure, and conditions inside and around the school premises where food is available, obtained, purchased, and or consumed should be assessed.  It is where children spend most of their time in the day, and where >1/3 of their meals and snacks are eaten. Unsurprisingly, school food environments have a big role in shaping young people’s food choices.

To build on this evidence base, three clear recommendations emerged consideration when setting the future agenda:

Young people hold an innate capacity to see the complexity of issues and to identify solutions to the problems we face in society today. An excellent example is CO-CREATE’s work convening systems mapping exercises with 16-18-year-olds across 5 European countries to depict their views on the drivers of overweight and obesity.

Obesity shares common drivers with undernutrition and climate change that cannot be ignored. This includes the role of the food industry, land use, energy production.

‘The idea in STOP is to identify casual pathways that lead from exposures to the development of childhood obesity. And to identify entry points of policy to break those causal pathways and make sure they do not eventually lead to childhood obesity. Or to remove them when possible. We want to do this by providing recommendations for policymakers.’ – Professor Franco Sassi, Professor of International Health Policy and Economics, Imperial College London’

We are ready to provide recommendations for policymakers, are they ready to act? Stay on the lookout for STOP’s second supplement with more in-depth evidence and information on the determinants of obesity.