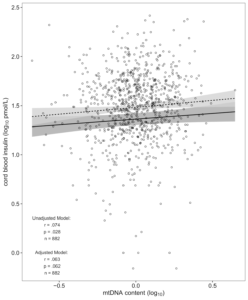 Metabolic factors including elevated insulin levels in early life are generally not regarded as harmful, especially when they are within the physiological range. Nevertheless, small alterations may be disadvantageous over time and increase the risk of metabolic diseases later in life. Mitochondria, the cell’s powerhouses, seem to play a key role in the etiology of insulin resistance. The variation in metabolic hormones at birth might be linked with mitochondrial function via changes in epigenetic programming, contributing to later life health or disease.

Frontiers in Genetics publishes rigorously peer-reviewed research on genes and genomes relating to all the domains of life, from humans to plants to livestock and other model organisms. The article talks about the relationship between mitochondrial DNA content and insulin levels at birth, which could predispose children to metabolic diseases later on.